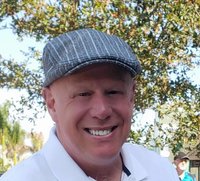 It is with deep sadness that the family of John Michael Brown announce his passing on Saturday, August 7, 2021 at the Oak Ridges Hospice in Port Perry. With his beloved wife Jess by his side, John’s lengthy battle with cancer came to a peaceful end. John’s family will miss him terribly. Beloved husband of 17 years to Jess Joss, loving father to Erin Fazzalari (Joe), Kelly Brown and Bentley Brown. John was the adored son of Janice White and was predeceased by his father, Maxwell Brown and his step-father, John White. Dear brother of Wendy Robb (Tim), Pam Cooney (Rick) and brother-in-law of Kim Brown. Predeceased by his brother Edward Brown.  John was also deeply loved by his mother and father-in-law Linda and Rudy Joss. He was a dear uncle to his nieces and nephews. John will also be greatly missed by his extended family, countless friends and the entire Ontario Slo-Pitch community. John was born and raised in Welland, Ontario. As a youth he enjoyed being active in many sports and played baseball with the Welland Minor Baseball Association. While attending Centennial High School, he was a proud member of their hockey and football teams. Following high school John attended Niagara College for Hotel and Restaurant Management. Subsequently he moved to Toronto and began his career in the hospitality industry, eventually switching industries to fleet management and vehicle sales. A true entrepreneur at heart, in 2005, he joined Jess in her online marketing firm, Insiteful Solutions. While being a man of many commitments and passions, John’s primary love in life was his family. Supporting his wife and children’s adventures and successes, he was and will always be their biggest cheerleader. John was the epitome of a family man and loved any opportunity to celebrate whether it was a shared meal, a weekend getaway at the cottage, or even a short but love-packed text message. John, along with Jess, was an active Rotarian for many years. Together they helped organize many charitable events and programs such as ‘Brush-a-mania’ and the ‘Passion for Fashion’ fashion show which raised funds for the Princess Margaret Hospital. He was President of the Don Mills Rotary Club and received the highest Rotarian honour, the Paul Harris Award, for his dedicated service. John was passionate about sports. Focusing on Slo-Pitch, John played in weekly leagues, as well as tournament teams who competed across the province. With talented teammates he travelled North America for tournaments, and over the years he earned three provincial championship rings. Through his involvement in Slo-Pitch John built many life-long friendships. A related interest which kept him very busy until the last few weeks of his life was investing in sports cards. This second business gave him much joy, filling many happy hours when he could no longer play ball, and he found new friendships with other passionate card collectors. John was a kind soul. Wherever he went, whatever activity he turned his mind to, he always brough his energy, compassion and his ability to ‘champion the underdog’. Nowhere was this more apparent than when, in his final months, he turned his quiet individual support of others into a personal online campaign hoping to inspire everyone to live their lives to the fullest, and with kindness. A deep thank you to everyone who rallied around his vision to share light with others.

John was first diagnosed with the rare form of cancer, osteo-sarcoma of the soft tissue, just over five years ago. During that time he received wonderful, comprehensive care from many stellar oncologists, surgeons, radiologists and team members within Princess Margaret Hospital. Such good fortune to have a world-class cancer center nearby and sincere thanks to the team for their dedication. His family would like to express their sincere thanks for the incredible support and kindness they have been shown by family, friends, neighbours and teammates during his treatment. John was absolutely stunned by the outpouring of support and thoughtfulness. As a family we continue to be inspired by the compassion and love that has surrounded us in these difficult times. John spent his last 47 days receiving exemplary care, comfort and friendship at the Oak Ridges Hospice in Port Perry. This beautiful place became a home-away-from-home, and warmly welcomed our family, friends and four-footed visitors with open arms. In late July a naming ceremony was held to dedicate the terrace as the John M. Brown Memorial Terrace, symbolizing the beginning of a charitable legacy established with the hospice. If desired, memorial donations may be made to the Oak Ridges Hospice (www.oakridgeshospice.com), to help them continue to provide life-changing care to patients and their families. A family ceremony will be held this week, with a celebration of his life scheduled for a later date where friends can gather together and share memories. Private arrangements have been entrusted to the WAGG FUNERAL HOME, 216 Queen Street in Port Perry (905-985-2171). Memories, photos and condolences may be shared at www.waggfuneralhome.com