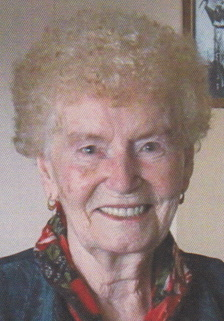 Passed peacefully at Port Perry Nursing Home on January 15th, 2020, in her 102nd year. Predeceased by her Husband, William (Bill) and her best friend and daughter, Andrea both in 1994.

Winnie was born on January 21st, 1918 in Warendon, England to her parents, Albert Field and Gertrude Field (nee Butcher).  A Veteran of World War II, Win served as a Radio Telephone Operator until the impending birth of her daughter – Andrea, interrupted her service.  During her service she met the love of her life, Bill – a Mosquito navigator and POW survivor in April 1943 and celebrated 50 years of marriage in 1993.

The adventure began shortly after the war ended and Win and Andrea sailed on the Queen Mary to Halifax and then by rail to their new home in Hamilton, Ontario where they joined Bill who had made the trip home previously. Win and Bill made many close friends in each of the cities they lived in North Bay, Huntsville, North Bay again, Sudbury and Oshawa.  Win was the person who gave everything away – clothes, money, food and possessions – this was certainly part of her generous soul. She had a passion for camping and they travelled across Canada from Newfoundland to British Columbia enjoying both the scenery and wildlife. She loved her flowers and spent countless hours digging, planting and weeding just to see the beauty that the flowers brought. Her favourite places though were in Ontario – notably Arrowhead and Algonquin Parks where when camping she made several excursions each day with her binoculars to view every species of bird that she was able to identify.

Private arrangements entrusted to the WAGG FUNERAL HOME, 216 Queen Street in Port Perry (905-985‑2171.  A service to honour Winnie will take place in the spring. If desired, memorial donations may be made by cheque to the Canadian Cancer Society. Memories, photos and condolences may be shared at www.waggfuneralhome.com

The next time you are working in the garden, out in the fields bird watching or camping think about Winnie – you can be sure that she won’t be far away.

Services for Winifred Hastie
There are no events scheduled. You can still show your support by planting a tree in memory of Winifred Hastie.
Visit the Tribute Store
Share A Memory
Plant a Tree