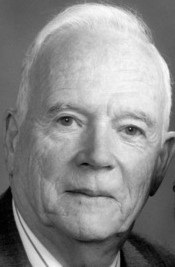 It is with great sadness that our family announces the passing of Cecil Arnott Neals on Tuesday, February 18, 2020. He will be remembered for his kind and steady nature. For Arnott, his word was his bond.Arnott was the beloved husband of Phyllis; the devoted father of Shirley (Lou), Randy (Helen), and Kevin; the loving grandfather of James, Jessie and Shea, and the caring brother of Jack. Arnott was raised in Bethany, Ontario. He moved to Toronto, and with Phyllis, raised 3 children. Arnott and Phyllis celebrated their 64th wedding anniversary on April 16, 2013. He gave 42 years of dedicated service to Massey Harris & Massey Ferguson, travelling the world to promote, sell and service their agricultural equipment. In his retirement, Arnott discovered the joys of grandchildren, the intricacy of growing hybrid tea roses and the reminiscing required as he chronicled his involvement in the rich history of Massey Ferguson.

A private family service was held at the WAGG FUNERAL HOME, 216 Queen Street in Port Perry (905-985-2171) on Tuesday, February 25th at 1:30 p.m. Interment St. Mary's Cemetery, Lifford. If desired, memorial donations may be made by cheque to a charity of your choice. Memories and condolences may be shared at www.waggfuneralhome.com

A private service was held at